As most of you know, I have been working within communication in China, and CSR is a big part of that. I am currently looking into CSR projects to implement in Angola, in the rural areas, not in the capital. There seems to be so much to do and so many projects to be done, but it takes time to find the right channels and the right people and the right projects of course. I'm not talking about charity. Charity is good. But I could argue that in developing countries like Angola, charity could, at the end of it, be more damaging than helpful.
A couple of weeks ago my boyfriend's dad was going out of Luanda for a couple of meetings; one of which was to pop by a farm of a close friend of his. He asked me if I would be interested in tagging along, which of course I was!
Very excited to see other regions of Luanda- we drove around the "VIA Expressa" to Luanda regions called "Cacuaco" and "Funda". We went to see an old relative, and it was very very interesting to see how majority of Angolan's live. I have visited expats in Luanda and wealthy angolans, but this was my first visit to a house where the hardworking peoples' salary does not exceed $400/month. I did not dare take photos of course, but the house was simple, thick walls of clay "adobe", small windows but clearly placed with precision for the ventilation was good. No air-conditioning, but the the thick walls kept a lot of the heat away, open doorways, a small courtyard in the middle of the house, scarcely any furniture. There was state electricity but no running water. Some chicken in the yard and small piglets.
Here are some photos from the way:


And the Chinese are busy little beavers, as they are building these huge compounds around, I heard the apartments are small, one bedroom apartments which should be the prefect fit for an average Angolan family of 8, right? 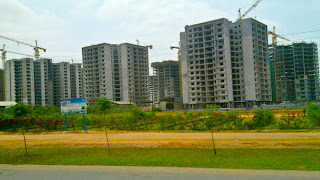 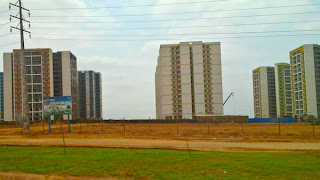 But back to my CSR story; we were heading towards the farm, and to my surprise it is quite vast!
Right now he had tomatoes, onions and corn, which was just starting to get ready. Of course the fields were very different from European, or at least Finnish crops. First of all the tomatoes were growing on the ground, with no support. The earth was dry and clay-like and there was no shade, just the burning sun, which meant that the lush green leaves of tomato plants were dry and brown more or less, but the tomatoes do look good and taste good!


But here comes the problem, there are too many tomatoes and people do not want to buy them anymore and the wet season is slowly coming in, meaning they will go bad very quickly. I think we all understand that in a country where agriculture is taking baby steps and where the starvation level is still high, there must be something wrong with the "supply chain" of this farm, i.e. he needs to find better people and places where to sell.
But this where I come in; my boyfriends father was telling his friend about the preserves of tomatoes I made the other week and he had never heard of such a thing. Sun dried tomatoes regretfully are out of the question because of the moisture and humidity of the air, but one can make quickly oven dried tomatoes, throw in some garlic and perhaps fried onions into the jar with some peppers and voila! back home as the summer is short, we always used to make preseves of cucumbers and beets and jam out of berries and apples.
So let us see if we can start local preserve business in here, starting with delicious tomatoes of course!
Posted by Ilkkuri at 15:05

So interesting to read abt your life in Angola! nice blog!

Your friend from your adventures in Russia- Virginia

Well its no different then any African/or Indian rural life..... Yeah its shocking for most of the west or European World as life is pretty neat and safe in EU......
The core difference is the value of human life or should i say HUMAN life is more valuable in developed worlds then in underdeveloped countries ......see DEMAND and SUpply again lol anyways it was really interesting to see how modern day dynamics is changing (for world over )!!!!

with developed economy turning heads down and huge population which was a curse before has played such a big/vital role for country like India / China.......

As a businessman i see big gap and was really interested in setting up business in African and latin american countries !!!!!

It was nice to read about your life and on your personal front how happy you are,,,,,,,,,happy thanksgiving and be coool MADAME Illona

Hope we happen to meet somewhere on this small little planet EARTH !!!!

very interesting Ilona...
I like to read your stories, but, yeah well, you know, the one I would like to pick out for hearing more opinions is ... Those Chinese beavers, the flats they build. Is it a bad thing?