You may join me in my surprise as I thought Angola would be an African country where you see lions and giraffes and half naked women draped in colourful canvasses carrying water on their heads while children with potbellies run naked in the sun.

What can I say, the country is divided clearly, like so many others, into capital and the rest of the country. There is Luanda and the rest of Angola. Luanda is a bustling, loud, dirty city; very clearly came into serious money before education. You know what I mean, like any South East Asian larger city; Luanda is being developed and built very quickly. You could almost compare the amount of cranes in the city's horizon into that of Beijing's horizon couple of years before the Big Games.


But unlike any other city that has quickly discovered oil or other coveted natural riches, Luanda's everyday life is no longer for the ordinary people: rent in the city starts from $3000-$9000 for a STUDIO apartment for a MONTH! Yes, we are still in Africa, and the city is Luanda, not London, you wouldn't find these prices in any major capital however posh and "the" place to be they were. And lets not forget that the electricity and water might be cut off any given time.

The expenses are visible in everything, starting from daily commodities like milk, bread- it is just plain wrong that bananas that they grow in Angola are cheaper to buy in Finland than locally...

Here's a couple of links to be gasped at like I am every time I leave the house:

And here's a link to an article about a local shop, not too far from where I live, that priced their melon 100$/pc! Funny article:

"The end of the war in 2002 led to an investment boom by China and some Western nations which has helped turn Angola into one of the world's fastest growing economies. The boom also helped push prices to record highs."

It seems that Angola was completely destroyed by the war and currently has no industry of its own. Angola doesn't really make anything and has hardly any agriculture or cattle. Oil accounts for over 96% of Angola’s total exports, whilst diamonds come a distant second with around 2%. Which basically means that Angola imports everything it needs. And this where China steps in- in the street view one can see many many Chinese companies, machinery and people. The wooden African artefacts sold at markets are made in China, the fabrics with bright colours and African prints are made in China, the carp they sell by the road is all made in China. And let me tell you- the prices are not what I would have paid for in China. Cheeky buggers. Unfortunately I don't know who I am calling cheeky here. Live and let live, right?


But expenses set aside, as soon as you leave Luanda and drive out for a couple of hours, you will see villages where women are dressed in colourful clothes and do carry water on their heads while children play outside and the earth is the colour red you have never seen! And the fruits are cheap and cheerful!


About the lions and giraffes- I'll let you know asap I visit a national park!
Posted by Ilkkuri at 20:13 No comments:

So here we are, a couple of years later and I am back; Ilona IS in Angola!

After Xmas I took my suitcase and started my voyage towards the southern hemisphere, which I shall refer to from now on as home! I arrived in good time but in not so good shape (after several flights and airport deaths) to celebrate the beginning of the year 2011! 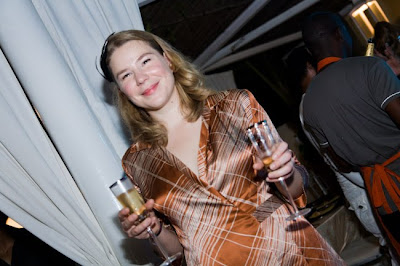 My boyfriend lives and works in Luanda, Angola, where hopefully I will find something groovy to do! So far I have done the following: sweating, spreading an equal amount of sun block and mosquito repellent on my body, sweating, sleeping, sweating, having several showers during the day, sweating, swimming, sweating, eating a bit, and more sweating... It is HOT! And I realise that I exchanged -23˚c into +37˚c, but never did I think it would be this difficult to get my body familiar with this heat. They say it might take a couple of weeks before I get used to it and stop sweating like a sprinkler...

But I am lying a bit, since I have done some cool things already: we went camping on the beach one weekend, to the Surfers' Beach; Cabo Ledo, where the waves are pretty high! And what we did last weekend, was to take out the boat and go to my boyfriend's family summer cottage in a place called Mussulo. Mussulo looks like an island on the coast, but is in fact a peninsula, and apparently quite the trendy place to be during the weekends. Not surprising as the water seems cleaner on that side and the waves calmer. It is perfect!

My goals for now are to learn Portuguese, experience Angola and hopefully Africa, find a great job and have fun! While doing that I will keep on writing this blog and sharing my experiences in this new culture of mine.
(Now I wish I had kept a blog in China, cause lets face it- we had some really crazy shit going on there!)